It was in the Gallery of Chimeras high atop Notre Dame Cathedral that Gisli Rathor could have met the man who might have changed her entire life, but the gargoyles were much too disturbing with their grotesque bodies and distorted faces. Hunched in the four corners of the gallery, they kept staring at her from dead eyes, strutting their frozen humps, their weathered limbs. Gisli didn’t quite know where to look, although the River Seine far down below provided her with some relief. She wouldn’t have paid much attention to any man, even if one had been there. The gargoyles were more than enough deformed masculinity for her mind.


She went to Venice by herself and treated herself to a gondola ride along one of the quiet canals. She watched her reflection in the calm water and was surprised that it wasn’t the same anymore, even though she had taken plenty of photographs of the gargoyles and the chimeras. An Italian gelato in a café along the canal made her forget where she had been. She knew when to let go, despite the fact that she held tightly on to herself wherever she went. She only trusted herself, even when it rained. It didn’t rain much in Venice. She hadn’t brought an umbrella, only her camera, to remind herself.


And then she did meet the man in Rome, in front of the Coliseum. They were taking the same photographs from the same spot, then went inside and took more identical photographs, the way vacations sometimes go. They couldn’t agree on what it meant, or on the significance of the ruins. Gisli only knew that she was there and that she was accumulating visual proof of her being there. Little else mattered. The sun was shining in vain, the pigeons cooed to themselves, the ruins reflected what was and what had once been. The man was at the center of her universe, at the center of the amphitheater of her mind, and she had a photograph to prove that as well.


Up in her hotel room, they found themselves caught up in a whole new turbulence far from the sacred stillness of the ancient ruins. The clock on the wall turned itself upside down, making it difficult to keep track. They could see the River Tiber from their window, entwined as they were. It still didn’t make any sense. Gisli kept trying to listen to the waves to keep herself anchored to herself, only to lose herself over and over again underneath the upside down clock, in the darkly mysterious shadows of the man.


Somewhere in some other universe, the waters of the Seine and the Tiber and the Venetian canals poured into a giant lake full of primordial reflections, ancient memories, fragile thoughts. Gisli saw her face in the lake, transformed beyond anything she had ever seen, and she still didn’t understand. Perhaps her photographs would help, if she ever managed to get back to herself again.
Copyright ©2015 Peter Baltensperger.  All rights reserved.  Do not reproduce in any form, including electronic, without the author’s express permission.
#     #      #
AUTHOR BIO
Peter Baltensperger is a Canadian writer of Swiss origin and the author of ten books of poetry, fiction, and non-fiction. His latest book is a collection of flash fiction, Inside from the Outside: A Journey in Sudden Fiction (available from Amazon). His work has appeared in print and on-line in several hundred publications around the world over the past several decades. He makes his home in London, Canada with his wife Viki and their four cats.

If you enjoyed this story, you might want to also check out another story written by Peter (Nocturnal Tableaux), published on this site in October 2012. Nocturnal was republished in Peter's aforementioned anthology Inside from the Outside). 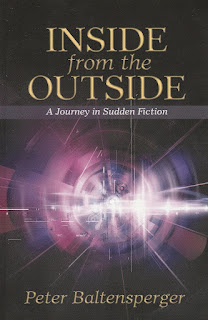